The Feds just cracked down on a major “Tech Support” scam

You know those alarming “your computer is infected” popups you get when you visit seemingly un-related websites?  The folks at Consumer Report’s Consumerist blog have some good news for inexperienced internet users 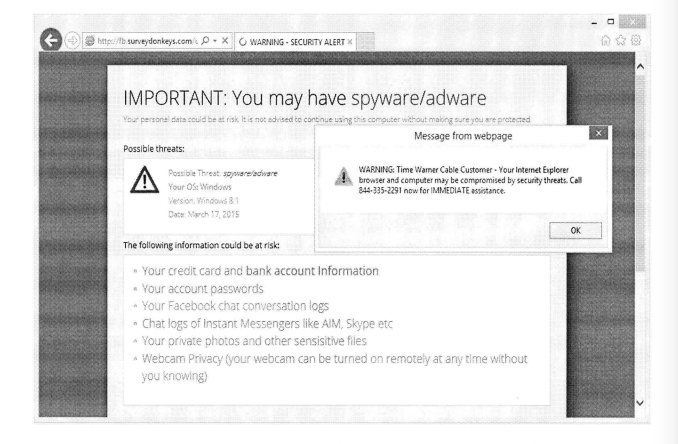 Screen shot of a typical, allegedly deceptive popup via Consumerist.com

Here’s a good rule of thumb: if a window pops up on your computer alerting you that your device has been compromised by a malware attack and offers to fix the problem by calling a toll-free number, there’s a good chance it’s a scam. To that end: federal regulators and the state of Florida have accused an international tech support operation of bilking millions of dollars from American consumers.

The Federal Trade Commission and the Florida Attorney General’s Office announced Friday that they have filed a complaint against several tech support operations in Florida, Iowa, Nevada, and Canada, accusing the companies of deceiving consumers on the security of their computers.

Good timing because by coincidence…

Just a reminder that actual reputable computer security firms don’t have to resort to bogus alerts or compromised plugins to get customers.  In fact reputable security firms spend a surprising amount of time cleaning up after the bogus ones.

Posted in Alerts and Warnings, tagged with: #internet scams, #malware